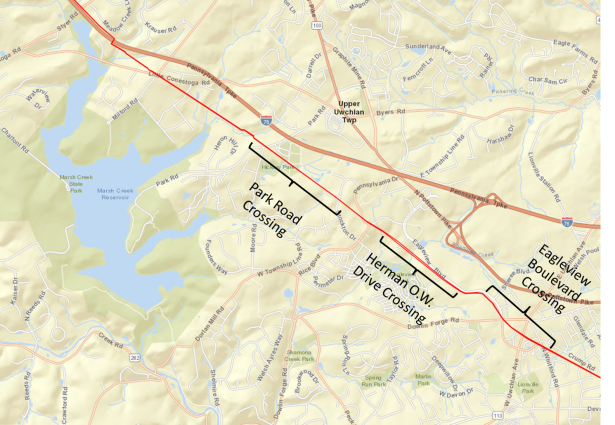 The DEP is soliciting public comments on Sunoco’s construction plans for three stretches of the Dragonpipe (Mariner East pipeline system) in northern Chester County. Comments are due soon (some as soon as Wednesday, July 3). I urge you to submit your comments on all three. Details on the procedure for commenting are at the end of this blog post.

In this post, I will summarize what I see as the worst elements of Sunoco’s three proposals. Feel free to use these ideas in your own comments. The three stretches, starting from the west, are:

For more details on these three proposals, read on.

All three of these proposals are for the installation of 20-inch pipe. (Except as noted, the companion 16-inch line has already been installed here.) In all three cases, installation is to be done by horizontal directional drilling (HDD). There are problems with all three proposals, and I will discuss each in turn. I consider the Park Road Crossing one to be the most problematic.

Park Road Crossing. For me, the worst aspect of this stretch is its route. The drilling would begin just west of Park Road and would continue eastward under the road and the forested wetland alongside Hickory Park. As I discussed in a previous post, once the pipeline is in operation, a rupture at the Park Road end of this stretch would leave the main facilities of Marsh Creek State Park and 200+ nearby homes enveloped in a flammable cloud. If the cloud caught fire, there would be no way out, and no way for potential rescuers to get in.

As part of its required re-evaluation of its plans for this stretch, Sunoco was supposed to consider alternative routes. In its new plan, it claims that “no practicable re-route option lies to the north or south.” It then observes that the route could be shifted to the north, but doing that “would require consent of newly-affected landowners or the use of eminent domain/condemnation….” While that is true, it is not an excuse for failure to consider alternative routes, especially since some alternatives would provide multiple escape routes for those who would otherwise by trapped by a large leak or rupture. The DEP must insist that Sunoco consider alternatives for siting this pipeline.

In addition, the southern end of this stretch would similarly block the only road into the new Teleflex Essential Medical complex in the Eagleview business campus. I am not sure if it is fully occupied yet, but it will eventually employ hundreds. They would all be trapped in the event of a leak or rupture at the entrance to their drive.

To top it off, this route travels under (and emerges near) the wetland behind Hickory Park. There were two frac-outs there when the 16-inch line was installed, one of them in a small stream that feeds Marsh Creek Lake. Sunoco claims that only 6 gallons of drilling mud were lost, but I visited the site myself at the time and I am confident that the amount was far greater.

There are endangered bog turtles in the wetland as well, and it will presumably soon be hatching season for them. If the DEP doesn’t worry about human lives, maybe it will at least take into consideration the endangered turtles.

For all these reasons, a new route must be found.

Heman O. W. Drive Crossing. This stretch runs through parts of the Eagleview business campus. Here, neither pipe has been installed. Drilling for the 16-inch pipe was initiated but is not yet completed. The plan that is up for comments is for the 20-inch pipe.

Similarly, frac-outs can be expected if drilling for the 20-inch line goes forward. If they are substantial, or if there is construction runoff at that end of the project, Shamona Creek is adjacent and may be contaminated. Sunoco’s record of pipeline construction so far shows that it does a very poor job of containing drilling mud at frac-outs and construction run-off.

The route of this stretch crosses under Herman O. W. Drive at its eastern end, near the drill location. if there were to be a large leak or rupture at that location once the pipeline is in operation, it would trap hundreds of employees at West Pharmaceutical Services, whose only access to their building is via Herman O. W. Drive. This is clearly a bad route for a dangerous pipeline. But Sunoco, again refusing to consider alternatives, says only that “deviation from the proposed route would pass through numerous commercial and residential developments similar to the setting to the currently permitted alignment…” But might some of those options eliminate the need to cut off the only possible escape route for those with offices in the vicinity of the pipeline? Sunoco apparently didn’t consider that factor to be worth looking into.

Eagleview Boulevard Crossing. This stretch passes through the full length of the Eagleview commercial district, an area frequented by thousands of people every day. There are many stores and restaurants right on Eagleview Boulevard, and many commercial and office buildings on the side streets. The southeastern end is in a dense residential area of apartments and suburban homes. If ever there were an example of poor pipeline siting, this is it.

We need to let the DEP know what a terrible choice of route this is. They may not care, because there are no wetlands here, and no endangered species—except humans. But tell them anyway. Again, Sunoco has not seriously considered any alternative.

Let the DEP know what you think! These three proposals by Sunoco put lives at risk and threaten our streams and endangered species.

Please submit your comments immediately. Feel free to make use of the information in this blog post in the comments you submit. But it is more effective if you use your own wording rather than simply copying mine. The DEP needs to hear from you!

Email your comments to: Ra-eppipelines@pa.gov

Please send separate comments for each of the three sections. Mention the names and ID numbers to make sure the DEP knows what you’re talking about. Each segment has a different due date: July 3 for Herman O. W. Drive Crossing, July 4 for Park Road Crossing, and July 10  for Eagleview Boulevard Crossing. But don’t wait for the deadlines—you can comment right now.

While you’re at it, why not copy your local state representative and senator? They need to hear your opinion too.

3 thoughts on “Let the DEP know: these three plans are all terrible. Submit your comments before the deadline!”