Sunoco has filed a “major modification” to its plans for putting the Dragonpipe (Mariner East pipeline system) through Middletown Township. It tried, and failed, to install the pipeline at this location via horizontal directional drilling (HDD). The drill ran into intractable rock and Sunoco had to abandon that approach after multiple attempts (but not before aggravating residents of nearby apartments into filing a lawsuit; they suffered through many weeks of 24-hour noise and vibration).

While the DEP has often granted previous Sunoco requests seemingly without a lot of scrutiny, they are taking this one seriously. Perhaps the level of public comment when Sunoco filed this plan last April had something to do with the DEP’s increased scrutiny of it. With more than a year elapsed since the request was filed, it looks like Sunoco may still be looking at a lengthy approval process.

In its modified proposal, Sunoco is planning to use a combination of open-trench construction plus various boring methods to get under roads and a railroad track. That change required a major-modification filing with the DEP, because the issues related to runoff, damage to wetlands, and waterway contamination have changed. 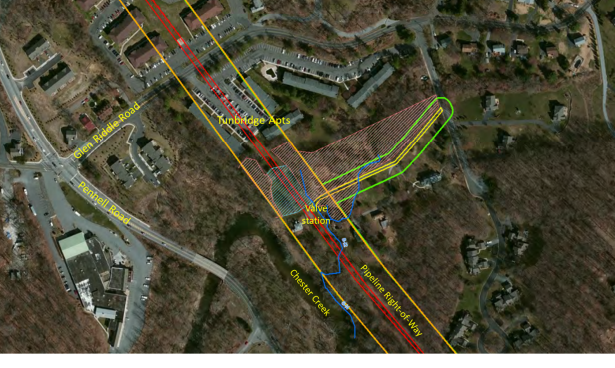 In this image, the red lines show the route of ME2 and ME2X. The yellow lines show Sunoco’s proposed “limit of disturbance” (work area). The light red and blue hatching is wetlands. (TetraTech image from Sunoco’s major-modification document, with my labels. )

Wetland preservation and management. The majority of the “technical deficiencies” cited by the DEP in its May 27 letter have to do with Sunoco’s plans for the wetland areas that surround the southeastern end of the pipeline segment, as well as a small creek. Sunoco’s planned trench runs through both. The wetlands are behind the Tunbridge Apartments and along Chester Creek (light blue and light red hatching in image above).

Wider limit of disturbance. Sunoco has proposed that width of the “limit of disturbance” (the area where ground will be disturbed by construction) be increased from the existing 50 feet to 110 feet in the wetland area. The DEP wants Sunoco to explain why that is necessary and why Sunoco believes it can claim “there will be no impacts” to the wetland.

Inadequate alternatives analysis. Sunoco is required to provide an “alternatives analysis” to show that its plan is the best option for the environment. In particular, the DEP is concerned that Sunoco plans to trench right through the wetlands. The letter states: “Alternatives such as utilization of a boring method … under the stream and wetland, and other impact avoidance and minimization measures, must be fully assessed. Boring is being proposed for two street crossings and one railroad crossing. You need to explain why boring cannot be used to cross wetlands and streams [as well].”

Is the wetland damage permanent? How seriously will the wetland be impacted by the new construction? How seriously has it already been impacted by Sunoco’s failed HDD work? The DEP objects to Sunoco’s use of the terms “minor” and “temporary”. The DEP writes: “It is questionable whether the impacts are minor due to the number and nature of impacts to date…. The degree and [number of] impacts to the wetlands may have altered the hydrology of the wetland to a degree that it cannot be restored…. A study plan needs to be prepared in accordance with [previous] comments regarding the hydrology … and submitted to DEP for review.”

What happened when the valve station was upgraded? Sunoco recently upgraded the valve station located on the edge of the wetland. The DEP asks Sunoco to “explain in detail the present impacts to [the wetland] due to the ME1 valve station upgrade as is stated in the amendment request.” (Sunoco’s valve station at this location serves a number of different pipelines, but I don’t believe ME1 is one of them. The mention of ME1 may be an error.)

Is the area historically important? The DEP wants Sunoco to obtain “a clearance letter from the Pennsylvania Historic and Museum Commission” regarding the company’s survey of the area to be trenched. Sunoco had previously surveyed the areas where HDD drilling was done, and it did additional survey work for the new plan.

Sunoco concluded that “No cultural material or archaeological sites were identified during the … archaeological survey and no further cultural resource investigations are recommended.” Evidently, the survey—which consisted of a “desktop review, background research, and site file review”, followed by a “pedestrian survey” and a series of “shovel tests”—did not completely satisfy the DEP. The survey is described in Sunoco’s July 24, 2019 communication to the DEP.

What about Media Borough’s land? Sunoco’s correspondence with the DEP does not address the question of whether the company will be able to use land near the Tunbridge Apartments owned by the Borough of Media as temporary workspace. Sunoco contacted the Borough about this and was turned down. It is unclear what impact that will have on Sunoco’s ability to do the trenching it proposes. It is also unclear whether Sunoco would be able to gain access to the land through eminent domain, since it is owned by a government entity.

In summary, the DEP seems to be taking a harder line with Sunoco’s proposal for the Tunbridge area than it has done for most areas in the past. It is asking for a lot more study and planning from Sunoco, particularly concerning the plans for construction across the wetlands, before it is ready to sign off on this part of the project.