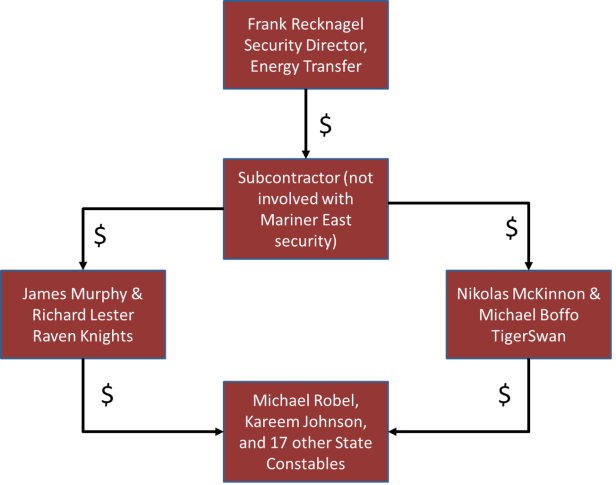 The probe of the illegal use of Pennsylvania State Constables by the Chester County DA’s office has turned up evidence of state-wide corruption among these elected officials. They are paid by the courts and are prohibited from performing private security duties. But at least 19 of them (including the two that were arrested last summer at Lisa Drive in Exton) have been participating in a private-security scheme arranged by Sunoco to intimidate residents in the vicinity of the Dragonpipe (Mariner East pipeline system) across the state. They have been paid under the table using funds indirectly supplied by Sunoco and they have not reported that income.

The Homeland Security agents initially interviewed Richard Lester, who told them that James Murphy was his “boss and business associate”. Both Lester and Murphy are among the five arrested yesterday (December 3). In a later conversation, Murphy told the agents that he had had “a contract with Sunoco for the past three years for the pipeline project that runs across the entire state.”

The bank records of Raven Knights were obtained in the Homeland Security audit. According to the DA’s complaint, “A review of the Raven Knights account showed approximately 19 certified Pennsylvania State Constables receiving pay checks from the company. Several of these State Constables were paid using handwritten checks on the Raven Knights account with the Raven Knights check heading, and they were not issued an IRS 1099 tax form for any of the payment years documented in the account records. … Many constables found to have been paid exclusively through the handwritten checks were not issued a 1099 form and appear to have been paid outside of required record keeping.”

The complaint lists several more constables, in addition to the two previously arrested, who did security work at Lisa Drive in Chester County.

The constables didn’t report the income as required. The complaint continues: “A review of publicly available State Ethics forms showed that of the 19 Constables identified via the Homeland Security Audit, none reported Sunoco Pipeline, Energy Transfer, or any subsidiary entity as an indirect source of income. Only two individuals reported Raven Knights as a direct source of income. Of the seven Constables who received more than $1,300 for this work in Chester County and were therefore required to report it on their Statement of Financial Interest, none did until after criminal charges were filed against Constables Johnson and Robel. A substantial number of the Pennsylvania State Constables identified as having been paid by Raven Knights (including five who worked in Chester Count) filed Statements of Financial Interest reporting income from sources such as real estate, private business, and being paid by the courts, but left off any income earned that was paid by Murphy using Raven Knights checks.”

This suggests to me that the constables receiving these payments may have failed to report them because they knew that the payments were illegal or unethical.

What about abuses in other parts of the state? The fact that this scheme involved constables across the state suggests that the abuses might not be limited to Lisa Drive and Chester County. In the wake of these findings, I imagine we may hear of similar events across Pennsylvania. The 17 constables who we now know were paid illegally and did not report that income must be waiting to find out whether they too will be charged.