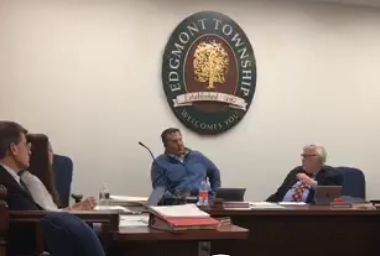 Edgmont Township, Delaware County, has recently had problems arising from the construction of the Dragonpipe (Mariner East pipeline system). This is on top of the township’s history of pre-Mariner Sunoco leaks (all of which were reported to Sunoco by residents).

The November 2 spill. There was a major spill of drilling mud on November 2 at a drill site along Valley Road. On November 5, Edgmont Township served Sunoco with two “Cease and Desist Orders” related to the incident, one related to failure to maintain required erosion and sediment control measures and the other related to the resulting pollution of Chester Creek. (Note that I have posted copies of these documents as a public resource. The Township website indicates that they are available there, but I couldn’t find them.)

The cease-and-desist orders describe the origins of the spill, which was not a typical “frac-out”. Here is how the Township’s orders described the incident, quoting from a DEP document: “The drilling pit overflowed with water and drilling fluids. The material went 450 feet, across a farm field towards the [tributary of Chester Creek]. The drilling fluid/water width is approximately 25 feet where it leaves the source, but spreads laterally to triple the width closer to the stream…. [The crew hired to maintain the pumps overnight] failed to operate the pumps….”

This sounds as if the release could have been caused by flowback water from an aquifer that is draining into the borehole. At the Shoen Road site in Chester County, this has occurred multiple times and has required the use of vacuum trucks to carry away the produced water and mud. But Sunoco failed to deal with the flow in this case in Edgmont.

What the Township requested. The cease-and-desist documents call for Sunoco to “cease and desist all operations immediately…”. The documents specify a daily fine: $1000/day for the erosion and sediment violation and $500/day for the creek pollution. Work is to be stopped and the site is to be remediated immediately. “The site remediation must be approved by the PA DEP, Delaware County Conservation District, and Township Engineer and proper reports provided to the Township…. Additionally, Sunoco and its contractors must immediately cease and desist construction activity and coordinate a site visit with the Township to develop and implement a plan for additional E&S [erosion and sediment] controls.”

The documents note that Sunoco has the right to appeal to the Township Zoning Hearing Board (see below).

But after the Orders were served, the Township dropped the ball. A month has passed, and it has taken no action.

What the Township talked about doing. The matter was discussed at the Edgmont Board of Supervisors’ meeting on November 12. You can watch a video of it here. (As of December 2, the minutes of that meeting have not yet appeared on the Township website.) At the meeting, the Board seemed to have gotten cold feet.

The Township Manager, Catherine Ricardo, reported that “everything is proceeding as normal…. Sunoco is continuing to pump drilling fluid and groundwater from the site.” She spoke enthusiastically about Sunoco’s pullback operation, in which pipe was installed in the HDD borehole. “I’d say it was pretty spectacular,” she reported. “It was a very significant operation.”

An audience member asked: “The pullback operation, is that in violation of the cease-and-desist order issued by the Township?” Ricardo responded that “the property is currently under a cease-and-desist. However, there is a statutory requirement that they have a certain period with which to respond with an appeal or compliance after a notification of violation is issued, and so operations can continue to operate under that cease-and-desist, so long as the Township does not seek emergency injunctive relief.”

Vice Chairman Hank Winchester (presiding over the meeting in the absence of Chairman Ron Gravina) responded, saying, “tomorrow [November 13] is the last day they have to tell us everything officially, what is being done and what they are doing to remedy the situation. And if they don’t do that within that time period, I think that is when we potentially can issue emergency injunctions, but until we find out what has been done….”

As the audience questions continued, he backed off from that position, saying, “We’re not going to decide that tonight. And we’re going to have to speak [with the Township lawyer and engineer] about it and what that means. I would like to know what other townships have filed emergency injunctions to stop, and what was the level of the problem that they filed that injunction. Because, if a sinkhole is created and pipe is swallowed up and all of that, and that’s when they filed the injunction, but a less serious event occurs, do other townships file injunctions to stop based on these kinds of levels? So I don’t have enough information tonight. I was hoping that they would come back to us by tomorrow with what they’re doing.”

An audience member replied: “I think, with all due respect, that when Edgmont issues a cease-and-desist order its citizens would be expected to comply. You say you have things to figure out—it seems to me that Sunoco should cease and desist while you’re figuring those things out.”

The meeting ended with no decision on whether to try to enforce the cease-and-desist orders. And follow-up inquiries to Edgmont Township, asking about grounds for Edgmont’s failure to obtain immediate compliance with its Cease and Desist Orders, have gone unanswered.

Has Edgmont lost its nerve? Nothing further has happened since the Board of Supervisors’ meeting on November 12. What’s going on? Clearly, Edgmont needs to hold the zoning hearing without further delay.

And (assuming they have not decided to simply forget about Sunoco’s violation of the law) they need to force compliance with the cease-and-desist order. To do that, they can get an emergency court injunction, or perhaps they can just call in the state police and have the workers who continue to work arrested.

Why the township has not done anything is a mystery. The lack of enforcement and the repeated rescheduling of zoning hearings is starting to make township officials look foolish. But could it be more devious than that? Could it be that the cease-and-desist orders and the scheduling of hearings were just a ploy to please constituents? Might the township officials simply be allowing Sunoco to go ahead with construction, even while putting on a show of regulatory action? Residents could be forgiven if they jump to that conclusion.

The protest. About 40 residents went out onto the pipeline easement at Meadow Lane and Shepherd Lane in Edgmont on Saturday (November 30) to highlight the township’s inaction. Work stopped for over an hour, until Sunoco called in the state police and the residents were threatened with arrest.

It’s unclear what they could be arrested for, since they had the owner’s permission to be on the property and they weren’t interfering with work (although Sunoco voluntary stopped operations there). My understanding is that Sunoco would need a “writ of possession” for the property (which they don’t have) in order for the police to legitimately charge anyone with trespassing.

Residents taking matters into their own hands in order to attempt to enforce Edgmont’s lawfully-issued Cease and Desist Orders was a good a start. It brought public attention to a serious problem. But it is up to township officials, not residents, to do the township’s job, including looking out for residents’ safety. Would Edgmont allow a taxpaying Edgmont resident to disregard a township Cease and Desist Order?

Edgmont needs to hold Sunoco to that same standard, to show that they mean business, and that they won’t be intimidated by Sunoco’s high-handed tactics. The Edgmont Township supervisors need to take action now.

If you agree, give the Township a call at 610-459-1662, or email Township Manager Catherine Ricardo at CRicardo@edgmont.org.