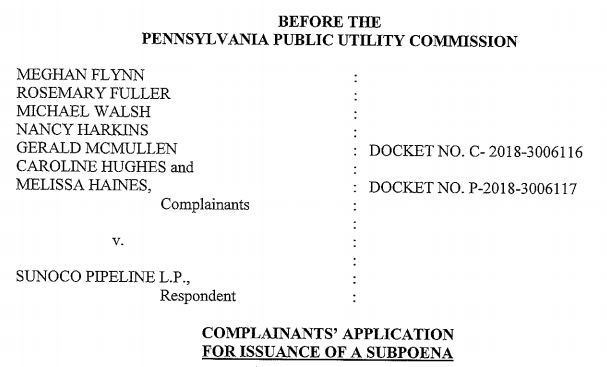 At the moment, much of the action concerning opposition to the Dragonpipe (Mariner East pipeline system) is happening at the Public Utility Commission. There are eight cases pending, the most prominent of which is the “Safety Seven” (Flynn et al.) case. The main news lately about Safety Seven has been the large number of “intervenors”. (By my count, we now have at least 14 that have filed to intervene. You can see a description of the case, including the list of intervenors, at “Annotated listing of pipeline-related cases before the PUC”.)

But behind the scenes and out of the news, the lawyers are at work laying the legal foundations of the case. The first public indication of this was the appearance on the PUC docket of an “Application for Issuance of a Subpoena” by the lawyer for the seven complainants. This indicates that the “discovery” phase of the case has begun, in which the legal team can request documents that are important to their case from other parties.

This first discovery request concerns documents that the PUC’s Bureau of Investigation and Enforcement (BI&E) obtained in its investigation of the Mariner East 1 leak near Morgantown. It is clear from the BI&E’s own complaint that the BI&E obtained a lot of documentation about Sunoco’s maintenance practices and the condition of the pipeline. That is the material that the Safety Seven legal team is now seeking. Here is how the subpoena document states it:

Here is the reason the subpoena provides for needing the documents:

“Complainants believe that an examination of the requested records and documents will demonstrate that (a) the 8 inch and 12 inch pipelines are too old and otherwise unsuited to transport HVLs safely, and (b) Sunoco is incapable of transporting HVLs safely through these pipelines.”

I find this request interesting for two reasons. First, the Morgantown leak is an actual, specific and well-documented example of a leak of highly-volatile liquids in an old pipeline, allegedly caused by poor maintenance and discovered by a landowner, not Sunoco. That makes it a great example to build a safety-related case around.

Second (and for me, unexpectedly), the documents are being requested from BI&E, not from Sunoco. I would imagine that makes it much harder for Sunoco to make a legal argument not to release the documents, or to limit the documents involved (although they will surely try to). It seems like a smart approach.

If these documents are obtained, and they become part of the public record in the hearing, they will tell us whether (as the BI&E has alleged in its complaint) Sunoco knowingly failed to follow its own maintenance procedures and failed to follow up on evidence of corrosion at Morgantown, with the result that the pipeline failed and leaked. If so (and if Morgantown is an example of Sunoco’s maintenance approach elsewhere) the same type of corrosion problem could exist all across the state.