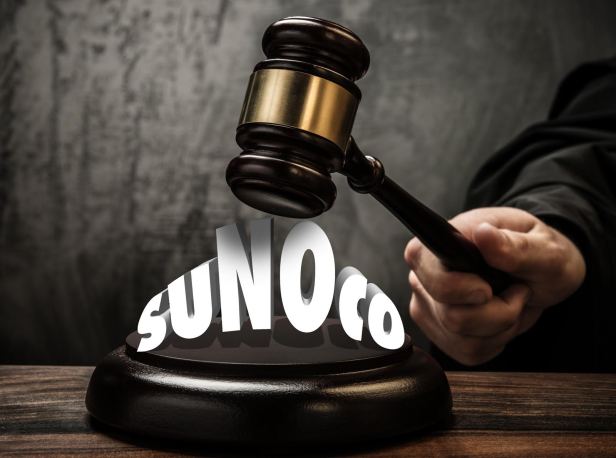 The last ten days haven’t been good ones for Sunoco/ETP, builders of the Dragonpipe (Mariner East 2 pipeline). Perhaps we will look back on the first half of March as an important turning point for opposition to the Dragonpipe.

On March 7, as a result of on-site inspections of the Exton-area sinkholes, the PUC’s (Public Utility Commission’s) Bureau of Investigation and Enforcement made a formal petition to the PUC’s Commissioners for an emergency shutdown order for the Mariner East 1, the old 8-inch pipeline that is already carrying compressed, highly-volatile gases from western Pennsylvania to Marcus Hook for export. Sinkholes caused by Dragonpipe drilling threatened to destabilize the ME1, risking a catastrophe. The Bureau had first asked Sunoco for a voluntary shutdown, which the company refused.

Later that day, the Chairman of the PUC, Gladys Brown, issued an Emergency Order, shutting the pipeline down. This is the first regulatory action by the PUC concerning the Dragonpipe and ME1. Until now, the agency has seen fit to stand by and watch, claiming a lack of jurisdiction. More details are here. PHMSA, the Federal pipeline safety agency, also showed up to inspect—another first.

Also on March 7, the State Ethics Commission confirmed that Yesenia Blane is under investigation. She is a key assistant to Governor Wolf whose husband works for the oil and gas industry, and she may have been involved in unethically pushing through environmental permits for the Dragonpipe.

On March 10, an anti-pipeline rally near the sinkhole area drew 100 or more protestors and lots of press coverage.

On March 13, Sunoco lost a case in Chester County court for violating East Goshen noise ordinances. This is Sunoco’s first loss in a county court that I am aware of. The fine is only $7,000—a trivial amount for Sunoco—but the company will appeal the ruling because it sets a precedent that other municipalities may follow.

On March 15, the full PUC met in Harrisburg and ratified, without any discussion, the emergency shutdown order for ME1. Ratification is required in the case of an Emergency Order issued by the Chairman.

On March 16, Sunoco was hit with two new Notices of Violation from the DEP (Department of Environmental Protection) for frac-outs. The first NOV concerned Snitz Creek, in Lebanon County, where frac-outs had already occurred on August 31 and September 20. Since this frac-out occurred while drilling for the second of the two Dragonpipe pipelines (called ME2 and ME2x), and since the earlier frac-outs had occurred while drilling for the first, Sunoco will have to go through a procedure involving a report by a professional geologist and a public comment period before drilling can resume.

The second Notice of Violation relates to a frac-out in a wetland in Blair County. In this instance, Sunoco only needs to file a “restart report” by a professional geologist, with no public comment.

The Blair County situation is particularly interesting (at least to lawyers) because the wetland in question is apparently part of CREP (the Conservation Reserve Enhancement Program), which pays landowners to conserve sensitive land. As I understand it, the state wants to fine the landowner (who it considers responsible for preventing contamination of the wetland). But Sunoco is clearly at fault. This one is bound to end up in court.

Also on March 16, two homeowners affected by the sinkholes filed a class action suit against Sunoco. Others in the affected area can be expected to join the suit.

Additionally, on March 16 Sunoco was hit with a $750,000 fine for illegally flaring gas at Marcus Hook. The Marcus Hook facility straddles the Pennsylvania/Delaware state line, and the flare tower is in Delaware, so the fine came from the Delaware Department of Natural Resources and Environmental Control. The flare tower had been illegally modified to flare materials from throughout the complex, not just those from the Delaware side (which is what they were permitted to do). This explains why Sunoco has been scrambling for permits to build a new flare tower on the Pennsylvania side.

Is it possible that Sunoco’s apparent strategy—to rush this pipeline through without proper permission, then clean up the mess later—is starting to backfire? Will this company come to regret its grand plan to pipe highly explosive gases right through our suburbs, for export to European plastic makers? Time will tell, but the events of early March do not bode well for Sunoco.

2 thoughts on “Sunoco suffers through a bad 10 days”