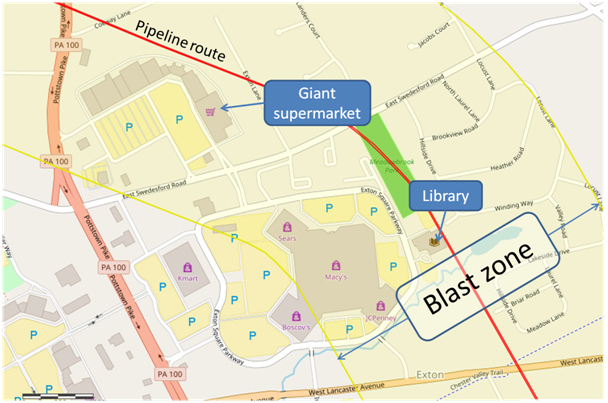 Sunoco originally planned to put the Dragonpipe (Mariner East 2 pipeline) under much of the Exton area by drilling. According to its new plans, however, it wants to run the pipeline through the heart of Exton mostly by trenching.

This is a terrible proposal. Full details are in a report that Sunoco submitted to the Department of Environmental Protection (DEP). In the report, Sunoco claims this route “avoids and minimizes new and permanent impacts on previously undisturbed land, land use encumbrance, and site-specific and cumulative impacts on land, environmental, and community resources.”

In fact, this plan does the opposite. As it passes the library, this approach destroys many of the remaining old-growth trees and much of the only significant remaining wetland in the center of Exton. And it runs right through the heart of downtown Exton, alongside the library and two major shopping malls, creating a massive, unnecessary danger to hundreds of people every day. (The “blast zone”, where near-total destruction would occur if the pipeline ruptured and ignited, is shown by the yellow shading in the map above.)

Sunoco failed to consider alternative routes. Sunoco filed the report with the DEP as the result of an agreement the company signed in August with the Clean Air Council and two other environmental groups. By the terms of that agreement, Sunoco is required to “…propose modification of the design of the HDD or relocation of the pipeline….“

But Sunoco has not met that requirement. It has not seriously considered relocation. Instead of insisting on routing the pipeline through the center of Exton, why didn’t Sunoco consider a route through rural countryside a quarter of a mile to the north, on the other side of Ship Road?  The damage to the environment would be far less, and the risks in the event of a leak would be dramatically smaller. But neither this nor any other alternative route was even considered.

The only reason the report gives for sticking to this route is that the company “routed the Project to be co-located with existing pipeline and other utility corridors to avoid new ‘greenfield’ routing alignments, to the maximum extent practicable.” That was already a weak argument when the pipeline was to be located far underground; but now that Sunoco is proposing to locate it near the surface, it is disastrous.

This plan must be stopped.

Tell the DEP about the problems you see with this plan: the loss of trees and wetlands, the threat to the library and businesses, the failure to consider alternatives—whatever you find wrong with it. Do it now!

But don’t stop there. To have greatest effect, it is important to send copies of your DEP comments to several other places:

But don’t wait. The “public comment” period only lasts until Nov. 20, so make yourself heard now!

9 thoughts on “Sunoco files its new plan: trenching through the heart of Exton”